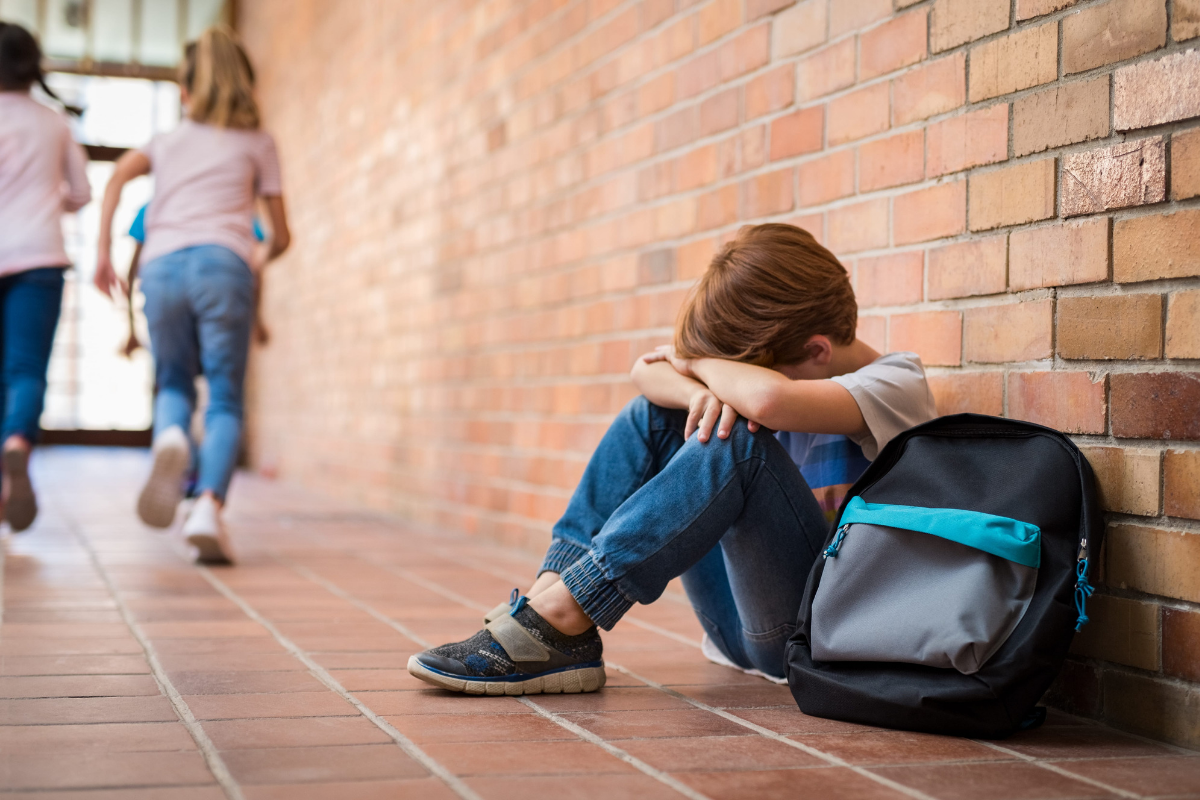 In middle school, I was one of only two kids with red hair. There was a gorgeous, popular girl with long auburn hair that had fiery highlights, and then there was me: a short, skinny skater kid with hair that looked orange in the sun, and like fire engine indoors. I was an instant target for bullies, and as if on cue, they lined up to torture me and make my life miserable.

Unfortunately, in the late ’80s and early ’90s, the common response to bullying was either to ignore it, saying, “boys will be boys,” or to rebuke the victim by insisting that being a “tattle-tale” was somehow worse than being a bully.

Thankfully, attitudes have changed. We are moving toward a more just, kinder society, but there is still more that we can do.

Bullying is a repeated aggressive behavior - physical or verbal - where one person or group in a position of power deliberately intimidates, abuses, or coerces an individual with the intention to hurt that person, physically or emotionally. (1)

To determine if an incident is a conflict or bullying, look for all 3 of these characteristics:

Anyone, children or adults, can experience many types of bullying. Some types are obvious, while others can be more subtle. (3)

Social bullying is often harder to recognize and can be carried out behind the bullied person's back. It is designed to harm someone's social reputation and/or cause humiliation. Social bullying includes:

Cyberbullying is overt or covert bullying behaviors using digital technologies, including hardware such as computers and smartphones, and software such as social media, instant messaging, texts, websites and other online platforms. In fact, 15% of high school students (grades 9–12) were electronically bullied in the past year (4) and 55.2% of LGBTQ students experienced cyberbullying. (5)

No matter where you are, bullying can happen, and if not monitored, it can escalate quickly.

Even though not all children exhibit warning signs, there are telltale indicators that could be going on. (8)

There could be unexplained injuries, destroyed property, faking illness, difficulty sleeping, loss of interest in school, changes in eating habits, loss of friends or avoidance of social situations, feelings of helplessness, and self-destructive behaviors.

Kids may be bullying others if they are violent, friends with other bullies, blame others, are competitive, have unexplained extra money or items, get sent to the principal's office frequently, and don’t take responsibility for their actions.

Be on the lookout for these warning signs and call for help if someone you know are having self-destructive behaviors, such as self harm and suicide. 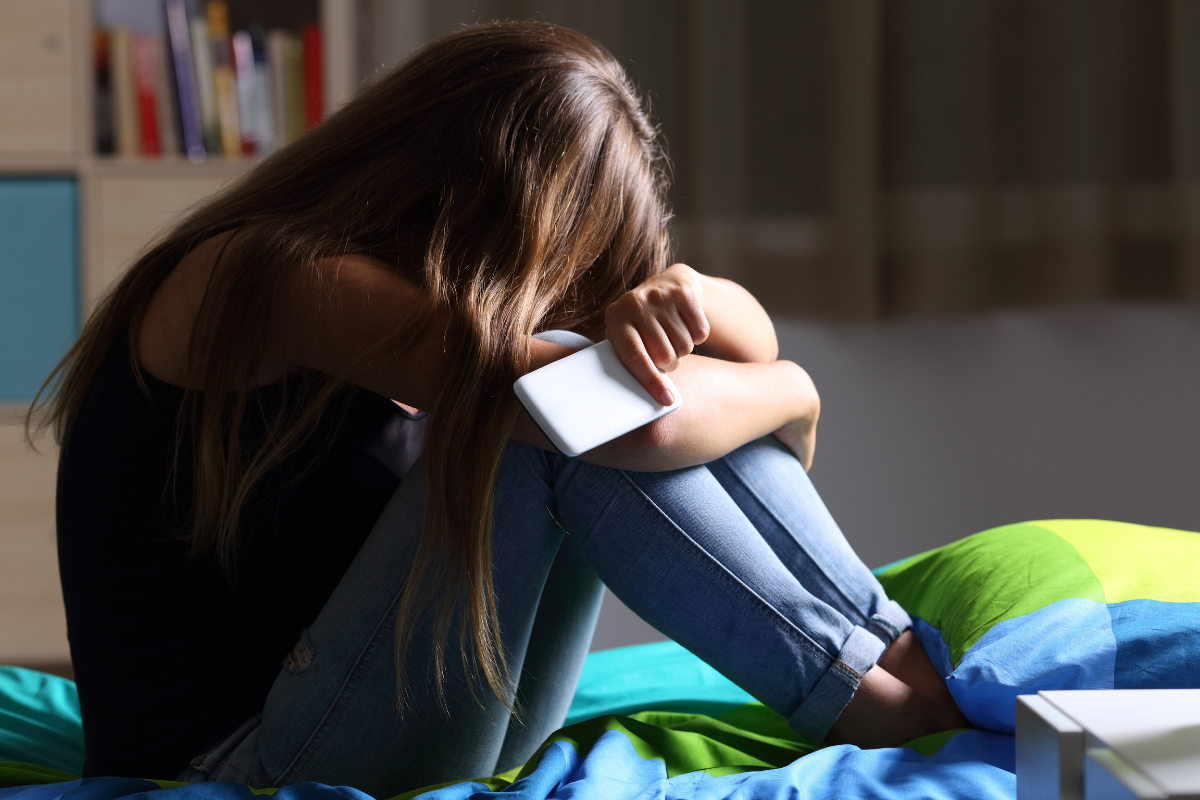 Everyone experiences bullies differently, but there are common consequences that each bullied individual has. (9)

Although some may be listed, more can take effect, such as symptoms of anxiety, feelings of shame, social isolation, psychosomatic symptoms (physical ailments with no medical cause) and even bedwetting.

For the bully, he or she may have poor school performance, increased truancy risk, substance abuse, and maybe even child abuse at home. A lack of education and employment is also a strong long-term effect.

How to Prevent Bullying

Fortunately, there is a way to stop bullying altogether. The help of parents, school staff, and caring adults can always make a difference. Even students and peers can step up. The best ways they can help is to: (10)

and most importantly, stop bullying on the spot. When bystanders intervene, bullying stops within 10 seconds 57% of the time. (11)

Get police or medical attention if a weapon is in use, there are serious threats, hate-motivated violence (homophobic or racist), bodily harm, or illegal acts are involved.

In addition, making sure you intervene immediately, separating the kids involved, making sure everyone is safe, reassuring the kids, and model respectful behavior is vital when approaching bullies.

Avoid the common mistakes of ignoring it, sorting out the facts, forcing testimonies, questioning in front of a group of people, talking to the kids together, and forcing apologies on the spot.

The important thing is to not become a bystander. Only about 20 to 30% of students who are bullied notify adults about bullying. (14) Action is the best resolution when it comes to bullying. As a bystander, you can question the behavior, redirect the conversation, come in a group, walk with the person being bullied, and reach out privately and check in on the person.

Standing up may be a lot to do, but there’s always more - raising awareness. Here are the top six ways you can raise your bullying awareness.

Volunteer with organizations that promote anti-bullying such as the Kind Campaign and Stomp Out Bullying.

Share your own story. Don't be afraid to inspire others. Bullying can only stop when others are aware of the reality.

Start a local initiative! Make a difference in your community by kickstarting your own program or newsletter for others to benefit from.

Get ready for October, which is National Bullying Prevention Month. Activities occur every week during October that many schools use to offer awareness and prevention.

You could even show support year-round by wearing a custom rubber wristband with a message! Go to Rapid Wristbands and order your anti-bullying wristband today! 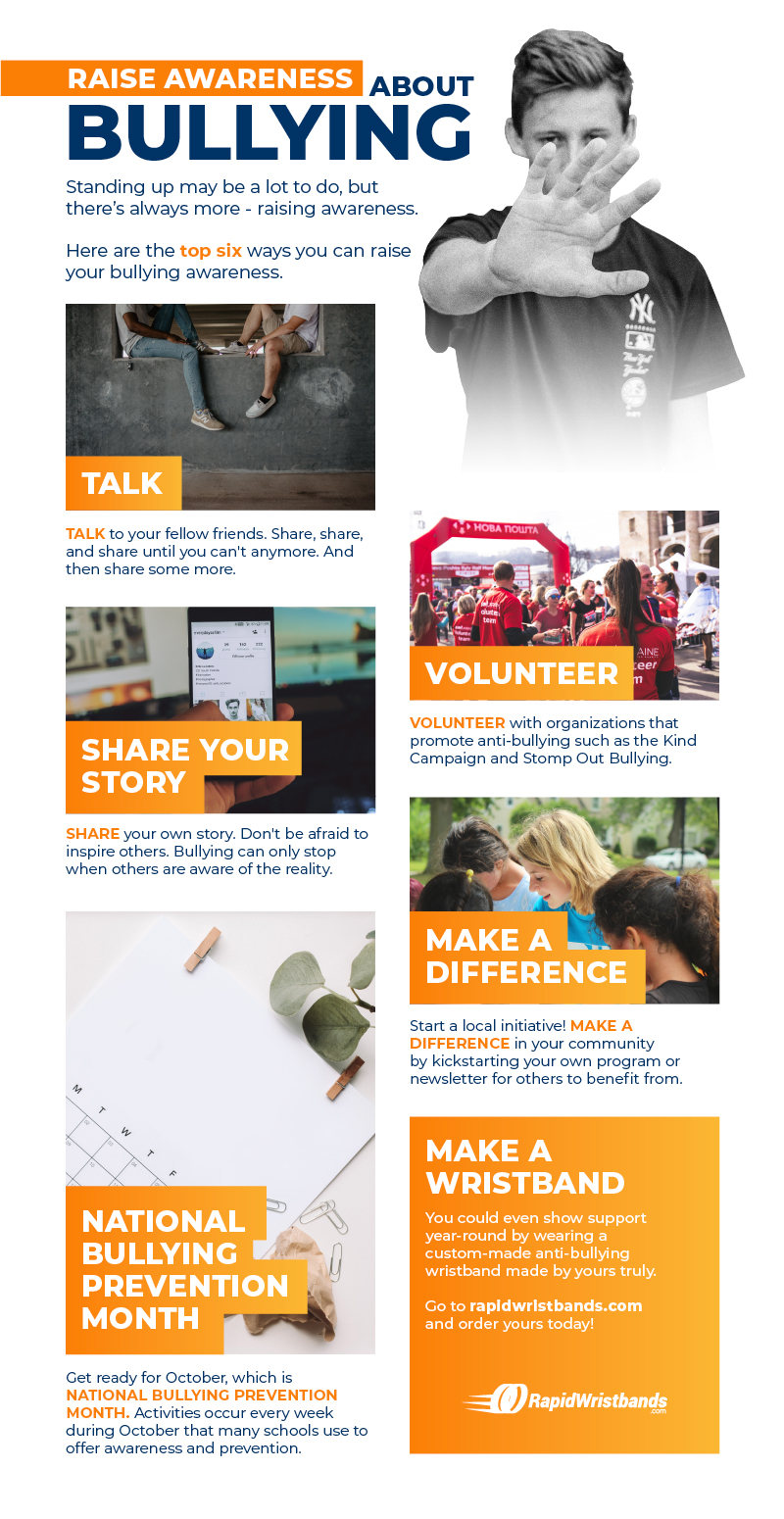 Luckily, I survived my long years of bullying pretty much intact. I have suffered a few of the long-term effects, such as finding it hard to trust people, and aversion to groups of people I don’t know or trust, but I have largely turned my negative experience into a positive empathy and passion to see that no one has to suffer the way I did. Please do your part to stop bullying in its tracks.

Centers for Disease Control and Prevention (2)

The 2011 National School Climate Survey: The experiences of lesbian, gay, bisexual and transgender youth in our nation’s schools.(5)

How to Prevent Bullying (10)

Effectiveness of school-based programs to reduce bullying: a systematic and meta-analytic review (14)